To share your memory on the wall of Edward Ryan, sign in using one of the following options:

Consider providing a gift of comfort for the family of Edward Ryan by sending flowers.

We encourage you to share your most beloved memories of Edward here, so that the family and other loved ones can always see it. You can upload cherished photographs, or share your favorite stories, and can even comment on those shared by others.

Posted Feb 17, 2021 at 10:57pm
Eddie was a great guy. He always went out of his way to help a friend. I will miss him terribly. My condolences to his mother, brother Tommy and his sisters.
Comment Share
Share via:

Posted Feb 17, 2021 at 10:01pm
we did lots of crazy things as kids didnt we, but laughter was the best...real belly laughs. Eddie and i loved cartoons and he was great mimic of many characters LOL. Then we would terrorize the with our mini bikes, remember we would fool the cops with that cut thru next Nickys house (my he RIP). remember all the runs at fountain ave? or that place Queens? remember our fights with Cathy? LOL a girl! YUK! LOL...there are a lifetime of memories in my head...and Joann what a sweetheart she was. your Mom and Dad and your Grandparents were all good to as well.
welp take it easy up there in Heaven old friend you and Roy must be building something or doing some wild burnouts.
Love ya bro...Now RIP with GOD.
your old friend Pete the Greek.
Comment Share
Share via:
MK

Posted Feb 10, 2021 at 12:12pm
First I would like to send my Love and condolences to the Ryan family. I am so very sorry for this great loss. Eddie has been a friend since we were kids on 7th Avenue, always with a kind and generous heart. When we got older and I had a family, Eddie always took care of our cars and made sure my girls cars were safe. My kids and I always knew that we could go to him and he would take care of everything. Especially if my kids were in trouble and I was unavailable and at work. I can't thank him enough for all he has done for us by always trying to help. Eddie, I know that you will be watching over your family, and also I know that everything you enjoyed here you will be able to enjoy there. We will all miss you.
Comment Share
Share via:
MK

Posted Feb 09, 2021 at 12:18pm
Our deepest condolences to you all. Eddie was a fabulous man. Here is a picture from when we drove to Buffalo for a car craft show and we broke down. He always had our back. Hugs and prayers Steve and Katrina Marshall.
Comment Share
Share via:
TB

Posted Feb 09, 2021 at 09:34am
I met Eddie in Grady High School and we have been friends ever since. Over the last 45 years he has been a staple in not only my life but my family's also. I could always stop by the shop and have a good laugh with Eddie, Tommy and Roy. He is a great friend and I will miss him dearly. Until we meet again rest in peace my friend.
Comment Share
Share via: 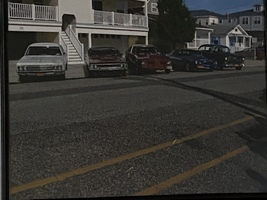