To share your memory on the wall of Giovanni Mosconi, sign in using one of the following options:

Mosconi, was a daily communicant at St. Anselm’s Church in Bay Ridge and a devoted family man ... Read More
Giovanni Mosconi, a longtime Bay Ridge resident and beloved Greenwich Village restaurateur, died Tuesday after a short illness. He was 85.

Mosconi, was a daily communicant at St. Anselm’s Church in Bay Ridge and a devoted family man to his four children and his wife Lucia of 37 years, who predeceased him.

Born in the northern mountainous region of Piacenza, Italy, Mosconi was a veteran of the Italian Army stationed at Lake Como. In his 20s, he moved to London, where he met his wife and went on to become a noted restaurateur in London and then later in Greenwich Village.

The eldest of 7 siblings, he along with his brother and sisters owned and operated Monte’s Trattoria and Villa Mosconi Restaurants, stalwarts of the West Village gastronomic scene for more than a generation.

"He had a humble, sweet and magnetic personality," said Bob McGee, a long-time family friend. "He loved everyone and treated everyone the same. He was a very strong man with a very tender loving heart.''

Viewing will be Tuesday from 2 to 4 and 5 to 8 p.m. The Requiem Mass will be celebrated at Noon on Wednesday at St. Anselm's Church (356 82nd St., Brooklyn, NY) by Monsignor David Cassato.

Mosconi will be be buried in London alongside his cherished wife Lucia.

In lieu of flowers, donations may be made in memory of Giovanni Mosconi to the Missionaries of Charity, 657 Washington St., New York, NY 10014, or to the Franciscan Friars of the Renewal at https://www.franciscanfriars.com/donate

Condolences may be sent to his children at 215 Willets Ln, Jericho, NY 11753
Read Less

Consider providing a gift of comfort for the family of Giovanni Mosconi by sending flowers.

We encourage you to share your most beloved memories of Giovanni here, so that the family and other loved ones can always see it. You can upload cherished photographs, or share your favorite stories, and can even comment on those shared by others.

Posted Jun 13, 2021 at 05:21pm
My condolences to Giovanni's family and my prayers too. And especially him. God Bless such a nice person.
Comment Share
Share via:
SW

Giovanni was like a grandfather to our daughter Hannah. He stood outside of Monte's and saw us walk by with a baby stroller, and encouraged us to come inside. While we dined, Giovanni and a female waiter took turns carrying Hannah around the restaurant. Hannah was the only child allowed inside the kitchen, and by the time she was 4 years old, she knew everyone in the kitchen. She often sat by the bar, chatting with the bartender. We felt totally at home at Monte's. Both Giovanni and Marco would sit at our table and talk about life.
MM

I was saddened when I received notice from Angela that her beloved Father had passed away. May the Soul of Giovanni rest in peace. Yesterday (Thursday, June 3, 2021), I offered the Holy Sacrifice of the Mass for his immortal Soul. May Jesus, Mary and Joseph comfort the Mosconi Family and all who mourn the departure of +Giovanni from this life.
Comment Share
Share via:

Posted Jun 04, 2021 at 10:59am
So sorry to hear of Gianni's passing ..... He was a very kind man and will be missed by many. My sincerest sympathy and condolences. Marylou Malvicini Thompson
Comment Share
Share via:
JM 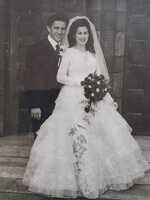